Right after I posted yesterday’s blog post, I spent some time on Ravelry (which I haven’t done in a while). I will always find inspiration there. It didn’t take long for me to find something new to knit.

Even though I’m already working on two pairs of mittens (one of which I begun in 2008…) I decided to cast on for another pair. I already had the pattern, and after some searching through the stash, I found the right yarn. I can’t help but feel a bit satisfied when I can begin a whole new project without spending any money. Naturally I bought the pattern book at one time, and the yarn, but I’ve already used the book several times before and all the different yarns came from my box of left over odds and ends (with one exception), so it really feels like this pair of mittens are practically free. And I like the idea of “make do” instead of always buying new things.

So right now I’m working on three pairs of mittens.

I cast on last night, and I’ve been knitting all morning. The pattern is “Cross & Crown” from Knitting Fair Isle Mittens and Gloves by Carol Rasmussen Noble. They’re actually fingerless gloves. Normally, I always add a thumb wedge if there isn’t one, but in this case I didn’t think it would look right, so I’m sticking with the pattern. Although I will place my thumb higher up, since the original placement wouldn’t fit me. 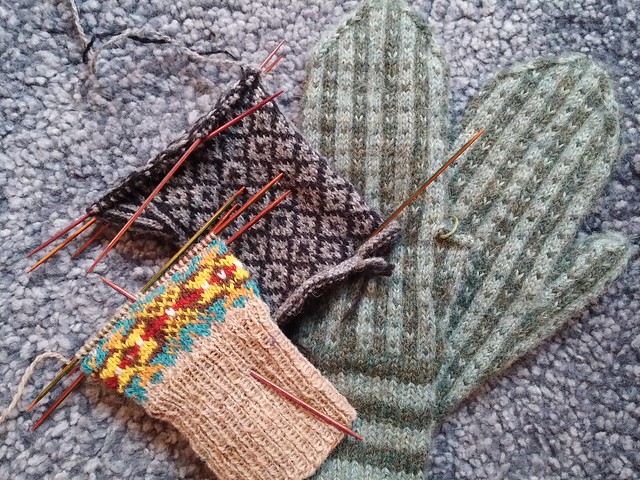 Here they are together with the other mittens I’m working on. The striped ones are only missing one thumb, so I’ll probably finish those pretty soon. The pattern is from the same book as above. They’re the ones I begun in 2008.

The one with the lozenge pattern is from a very nice book called Varmt & Stickat. It’s only available in Swedish and Finnish, as far as I know.

Well, my annual Christmas cold has arrived. As if on cue. I do hope I’ll be well enough for the Christmas party we’re invited to on Saturday.

The cats are of course happy I’m at home with them. They’re both asleep next to me on the sofa.

Luckily, I don’t have much of a fever, just a sore throat and a pretty bad cough, which means I can stay out of bed and knit!

I’m working on the striped collar/cowl “Söderängskrage” designed by my dear friend Erika Åberg. You can find the pattern in Varmt & Stickat, which was published earlier this autumn.

I’m mostly using leftover yarn from Stefan’s Argyll Vest and some other odds and ends.

I really, really love to knit. I knit almost every day, simply because it’s fun, but also because I like to create someting that I can use. Material is also important of course, I mean, there wouldn’t be much knitting without yarn. I have a lot of yarn. Not as much as some of my friends, but still enough to keep me knitting for at least a couple of years without buying new yarn.

I still do, though. Buy new yarn. It’s hard not to when you come across a lovely wooly, soft hank. But I don’t buy as much yarn as I did a few yars ago. I’ve become more picky. More concerened about quality.

I also have quite a few unfinshed knits. I’ve realized that I will never finish some of them. Some were not that fun to knit. Or I might no longer want the garment.

Well, the best thing to do when you have a UFO that you will never finish is simply to rip it out! Wind the yarn into hanks, wash them gently in tepid water in the sink, hang them up to dry and voilá, new yarn! Without going to the shops.